Our first rest day of the tour. We have now been driving for five days, so everyone was looking forward to a day to chill out. Our hotel, The Rambagh Palace is quite simply one of the most luxurious hotels we have ever stayed at. 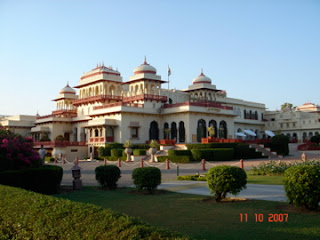 To have a day when we didn't have to get up at 6 am and leave by 7 am, was very welcome indeed. We decided to have a late breakfast and then have a car and driver give us a tour of Jaipur. Before that I just had to check the car over. We have now travelled nearly 2,000 kms and it was time to make sure everything was OK; tyres, water, oil, washer fluids and finally re-arrange our luggage so that some of the rattles in the rear will cease!

We left the hotel at 11 am and drove into the centre of Jaipur, known as the Pink City. The old fortified walls are painted in a lovely red ochre, and we drove through one of the gates to the City Palace, the residence of the Maharajah of Jaipur and his family. We spent half an hour looking at the public areas and bought one or two items from local craftsmen for our grandchildren.

We then headed out of the city to the summer residence of the Maharajah. The palace is very similar to the Lake Palace in Udaipur, as it is an island in the middle of a lake. 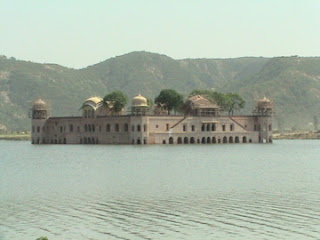 The palace is no longer used but is being restored.

Close to the the palace was a vast antiques warehouse where we spent a fun hour looking at a huge array of Indian craftsmanship. In the end we bought a 2ft high painted teak elephant which we are having shipped back to England.

We then returned to the centre but were caught up in the call to prayers of the Muslims celebrating the end of Ramadan. The roads were jammed by thousands of white capped Muslims and we took over an hour to find a way back to our hotel.

The afternoon was spent by the pool before we were taken by coach to a very special party given by the Maharajah at the City Palace. HERO had arranged for us all to have traditional Indian clothes which added to the occasion. When we arrived at the palace we were greeted by dancers, camels, riders on horses and elephants. The photo below is of one of the magnificently decorated elephants with one of our group, Alvaro de la Macorra from Mexico City, in the Indian dress. 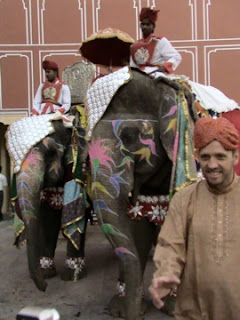 We then all went in a long procession into the private areas of the palace. A special elephant polo match had been arranged, with members of the group riding the elephants. A mahout controlled the elephant whilst the passenger attempted to hit the ball with the polo stick. At the end of the match the elephants lined up with Julie Brogan riding the principal elephant as it was her birthday 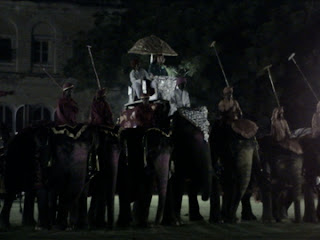 We were then entertained by traditional Indian dancing and a wonderful meal in the Maharajah's private courtyard. It was a very special evening, which we will all remember.

Tomorrow we head for Delhi, some 300 kms north of Jaipur. We will be spending two nights there before the long drive to the Punjab and Amritsar. 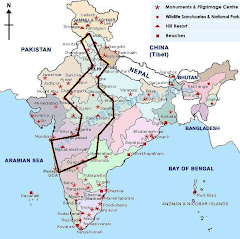